The Santa run and Christmas dinner at The Brigham, December 2022

The Santa run and Christmas dinner at The Brigham, December 2022 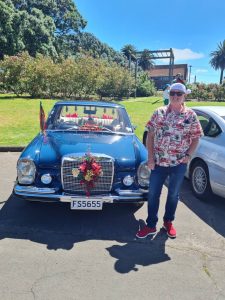 After “days” of rain (sorry, shouldn’t mention the weather) the sun broke through and we had a fantastic afternoon for the annual Santa run to our Christmas dinner. It seemed everyone in Auckland was pleased to be out and the beaches were fully occupied out our way.

We motored to Parnell Gardens for the judging of the best dressed car and person. The competition was fierce if somewhat exclusive this year. It seemed to be dominated by those of us in the Eastern suburbs. Last year’s winners, Lindsay and Karran, had raided some poor child’s soft toy collection while Janine was trying to make out that she doesn’t like Christmas by bringing her grinch – no, not Daryl. Ken’s lighting display was too subtle for full sun and Chris and Debbie’s blow up Santa was a bit deflated. Noel and Katy lost a Santa on the motorway but Noel’s hat kind of made up for it. Jack came to town with the tinsel but the winner on the day was Trevor, who had accessorized his car complete with Christmas sweater.

There was a strong couples theme to the Christmas outfits – we missed that memo. Special mention to Richard and Samantha for their matching Christmas sweaters although they missed the judging. Best dressed person was awarded to Brian, who was very dapper in bowler and cane, 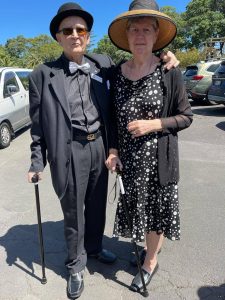 and Lynn’s outfit complimented the look!

The usual shambles ensued as we left Parnell Gardens, ignoring Deepa’s instructions to follow her. Fortunately the verbal briefing was good and we sorted ourselves out on the motorway after crossing the Harbour Bridge, and then headed west across the upper harbour to Whenupai or Hobsonville, depending on your view of the real estate market. We arrived at The Brigham to meet up with our fellow club members who had opted for the direct route.

Although there was some concern that we had a lot of time to fill in before dinner we chatted among ourselves without having to crank up the karaoke – Mike had noted at one point that we had use of a microphone and sound system. When I raised the concern that he was suggesting karaoke he was firm that is not an option. Mike did provide a run down on the past year noting that we had 16 events in 2022, despite a shaky start with the cancellation of the Ellerslie and Brit and Euro car shows.

Dinner was served outside with complimentary Christmas crackers. As usual the prizes weren’t gre 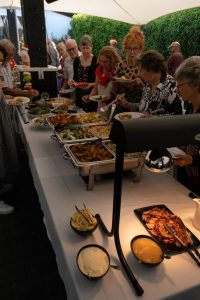 at and the jokes made some Dads look like real comedians. We enjoyed a good buffet, with ham and Christmas pud.

Big thanks to Mike and Deepa for organising the event. Look forward to seeing everyone next year.