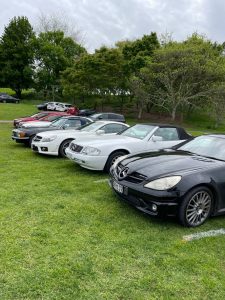 Saturday 15th of November found us all meeting at BP Papakura for the much-awaited Economy Run to Hamilton Gardens. This event was cancelled last year due to Covid and we were all eager to go.  Topping up our tanks by letting the bowser turn off automatically and then one more squirt for luck, we loitered in the weak spring sunshine waiting for the 10am start.  This fueling process was to be repeated once in Hamilton to ascertain the fuel used and compared to the published figures for each of our cars.  The closest percentage over this number won the trophy. Trust me, there was some maths involved!!  Chris and Graeme checked our figures, so all was well in the end.

There were a lot of theories and driving techniques involved; tyre pressure, minimal braking, coasting down the hills … When Arthur and I were overtaken by a black AMG and a white AMG we realised there were those who weren’t really invested in the whole economy thing. The main theory was our cars are made to be played and if we wanted economy, we would drive a Hybrid 😊.  I have heard it said that Mike used more petrol driving to Hamilton than he did driving home from the event. 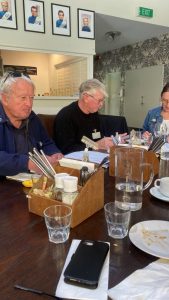 As the crow flies it is 98 kilometres from the BP petrol station in Papakura to the Z station in Hamilton, but we went the road less traveled and made it in 114 kilometres.  Heading South we detoured through Te Kauwhata and around a shallow lake dotted with duck mai-mais, eyes peeled for the quiz questions on the run sheet.  This is one of the things that we really enjoy about our car trips with the club; traveling the minor side-roads, looking for obscure clues en-route and seeing parts of the country which we wouldn’t normally see.

After having had our figures and percentages checked we were free to enjoy lunch and a leisurely stroll around the stunning Hamilton Botanical Gardens before heading home at our own pace.  Thank you to Chris and Graeme for another fabulous outing.