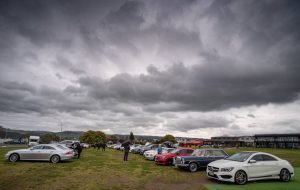 Thursday: The cool south wind blasted across the Taupo grasslands. The Concours judges tent bowed to the wind gusts. In they flew – the “Mercs” – they circled, wheeled, cruised in and landed on the grassy velt. A gull wing arrived, tired from a long journey – fluttered – and settled amongst the flock. The Mercedes Benz Club of New Zealand 50th Anniversary had begun.

Amidst flapping papers, the Judges walked the rows of the 53 cars – gleaming and shining in the crisp Lakeland air – their focus razor sharp – seeking out the perfect – nervous parents looked on – chamois at the ready – winner to be revealed later they said. Then the Mercs flew – off they went – not a feather or a duster remained.

That evening the friends – old and new from near and far met at the Mole and Chicken – a long slow cooked meal was enjoyed and many yarns were regaled. 50 years and 50+ cars that’s a lot of yarns.

Friday: Wairakei dawned damp. Over 40 cars braved the mist and lined the road at 9am sharp. Daryl and Chris said GO! The cruise was on. First stop was the Beer Can Museum at Galatea.  What do 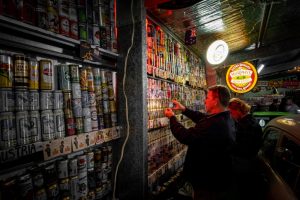 12,000 historic beer cans, 20 classic tractors, 13 classic cars (mostly Fords) and 40 Mercedes have in common? Ask Eric – the farmer (and father of the can collector son Barry) – as he started up his Super Six Ford tractor – Passion! …that’s what. A friendly cup of tea later and the convoy set off – winding under the brooding hills of the Urewera Ranges – curving down through the valleys over the Matahina dam – descending to the coastal settlement of Whakatane snuggled by the river. The Fishing Club on the wharf provided an amazing lunch – outside the seabirds eyed up any unguarded potato chips – the “Mercs” waited patiently – ready to fly again.

Saturday: A free morning – the sun shone brightly – jet boats – fishing – bushwalks – prawn lunches – cafe cruising – afternoon snoozing – a great day. Whoops … better get to the Auto Restoration presentation. Neil D’Arcy-Brown presented an overview of the Company with the many skills available including engineering, fabrication, paint and upholstery. Additionally, they assist in vehicle importation and certification.  There were photos of some amazing restorations from an 1899 Benz Velo to many classic and modern day vehicles. Neil has over 50 years experience in the NZ motor industry and gave some interesting insights and photos of the infamous Motogard Mercedes Rally visit to NZ in 1980.  Also, who would have guessed that there is a 1948 Ferrari 166 Inter road car (Build No 7) in NZ valued in the multi $millions? Amazing. Wallets firmly tucked away we headed for the 50th birthday bash! 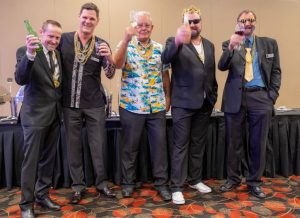 What a night … from the Bling Bling golden themed happy hour (very happy) onwards it was quite an evening – the royal jewels, gold tiaras and cuff links were dusted off – quite a few gangsters appeared with faux gold $2 shop apparel – every table was decorated with twinkling lights and gold 50’s – a delicious buffet which included freshly cooked trout provided by member Stuart – what a treat!

The serious stuff – The Club Patron Ian Longley gave a wonderful history of the initial formation of the Club 50 years ago at Waipukurau in the Red Cross hall – and he should know, he was there. Amazing! Even though he says it took 10 years to get his “A” into “G” to set up this club, at 92 years Ian is a credit to the loyalty that really is the backbone of the club – absolutely well done – and fully recognised by all those present. Peter Shelton gave a detailed run down on the formation of the initial regional clubs and later the combined affiliated national Mercedes Benz Club of New Zealand. The new President Richard Davison gave a warm welcome to all who had travelled from far and wide and invited everyone to have a great night – and they did! 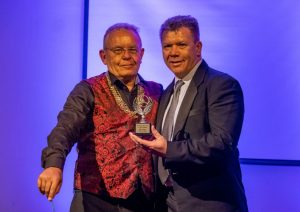 The Show and Shine winner by a very close margin over a Classic was Rudi Stander with his modern immaculate CLA 45 AMG S.  Great job Rudi, well deserved. The “Challenge” winners were Chris and Debbie Scullin involving Greg and Barbara Lokes in a surprise “photo bomb” late one night.

Let the Singing and Dancing commence – the De Novo group really got the room jiving with great live music – jackets were thrown off – ties followed and the party was on – amid the sparkles of discarded golden bling, a crowded dance floor and quite a few bubbles the night was “a ripper!”, as Eric the farmer would say.

The ending – well we must have made quite a racket as our music and dance attracted the 20 somethings from the room next door – apparently we were the place to be! “Let’s crack on” the folks from Avid super car touring group from Christchurch said – gate crashing our bash bearing gifts of wine – good oh! you’re welcome to join in. They were all car mad with Lambos, Ferraris and Astons half way through their North Island tour. 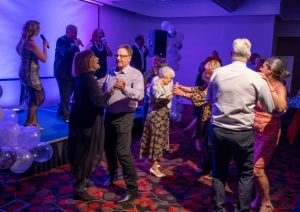 What brought us all together … Cars and Passion!!

Sunday:  the “Mercs” were unleashed from the Wairakei stable and flew to all points of the compass North, South, East and West. Till next we meet …Here’s to another 50 years!