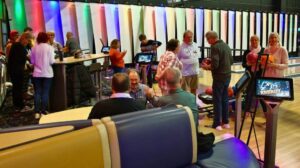 Rugged up for the cold, came the 20 members young and bold!!!

Donning red and white slippery bowling shoes, 9.30am alas was way too early to roll out the booze.

Once the teams were set, the lanes, bowls and pins readied, the starting members themselves steadied.

Three fingers grip the bowling ball, stances set so as not to fall.

Different styles came to the fore as the bowls raced down the floor. 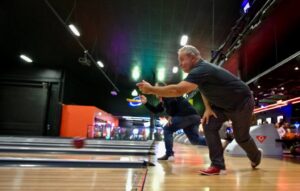 With some spinning to the left and others to the right, all hurled with cunning and all their might.

Again and again balls continued to roll, and the effort surely was taking its toll.

Some of the early leaders began to strain, the weight of the balls causing pain.

With lots of laughter and fun to be had, not only for the good attempts but also the bad.

In the end when the scores were counted, one player was on top.  Greg was clearly cream of the crop.

With Mike a close 2nd, Ken 3rd, Evelyn “Queenpin”, Astrid and Barb following in. Greg had 3 strikes with John next in line, Karran 12 gutterballs, Janine 10, but they enjoyed themselves heartily and that’s just fine. 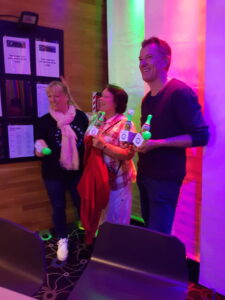 The adventure had not ended at this point, as 15 then transported to a nearby Cafe joint.

Once watered, fed, and socialising finished, we said our goodbyes and the group disbanded.

When all is said and done it was a great day of fun, and I have to say thanks to all those who made this a great day.