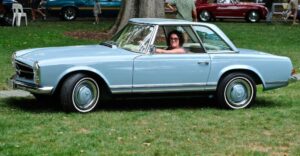 Mercedes engineers were given three specifications to design a joint replacement for the very popular 190SL and the 300SL (which was a legend in its own lifetime). The new car had to be (1) bright and comfortable, and spacious. (2) Use as many elements as possible of existing series and (3) have a beautiful body.

The result,  first seen at the Geneva Motor Show in March 1963, was what became popularly known as The Pagoda because of the concave bow in its roof.

New club member, Penny Webster, is the proud owner of a LHD 1966 230SL automatic. A 1966 Pagoda was well placed between the start of production in 1963 and the final cars rolling off the line in March 1971. 48,912 cars were made for world- wide distribution.

Penny’s husband ,Donald Webster takes up the story: We imported the car from USA in 2016 having bought it from an auction in Indianapolis in May. It was dark blue when we bought it but the paintwork was not flash with lots of swirl scratch marks. This was to be a present for Penny for a “significant” birthday, but as Penny had set her heart on a Light Blue one, we decided to repaint it. 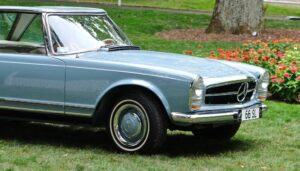 We did some research and decided that we would send the car to Ron Spyve in Newstead near Hamilton to strip the dark blue off and see what we had. It turned out to have originally been a burgundy colour, so as the car was already stripped at this stage it would not be hard to strip it back to the bare metal. So we told Ron to do that. At that point we saw that we had some work to do so Ron and his team set to work to do a bare metal restoration. This wasn’t the original intention when buying the car as we only wanted a nice sunny day driving car. The “significant birthday” date arrived in November 2016 and unsurprisingly, the car wasn’t ready, so Penny had to make do with a 1/18th size model in Horizon Blue as her present. When Ron’s work was done the point in time came to repaint her, there was no decision on the colour required  as the car  was always going to be Horizon Blue, a genuine Mercedes colour for the 230SL at the time in 1966. Ron and his team, including Steve and Lindsay had done such an awesome job on the body that at that point the decision was made to prepare her to Masters Class standard. Penny met a lot of resistance to the decision to paint the car Horizon Blue because it was not the correct colour code stamped on the manufacturers plate, but despite the consequence that the car could get marked down in points at the Concours d’Elegance competition because the numbers did not match up we decided to stick to our guns and  proceed according to Penny’s original wishes. 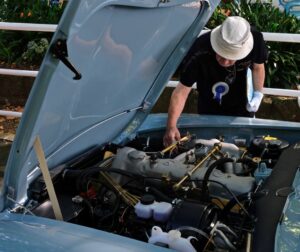 Marx to reassemble. Lloyd had, in the meantime, while the car was being worked on by Ron and his team, reconditioned the engine, transmission, suspension etc. Lloyd  works in a big workshop beside his home in Pirongia. He completed the meticulous rebuild progressively over the next 11 months and we got the car back in November last year. We had it complied in January and got it registered on the Thursday before the Ellerslie show. We were thrilled that the personalised plate 66SL was available. We had the car detailed by a friend of ours, Myles Hicks from Ardmore, no stranger to the winners circle at Concours himself having had 8 winners over the years. Myles probably had the closest look at the finished car than anybody, with his critical eye he told us not to get our hopes up.  Until the show the car had only done 4 miles of driving, mainly by Lloyd to make sure everything worked OK, but we were not going to compromise the car’s potential by driving it until after the show. When I drove the car into the Masterclass circle, I saw no Mustangs, so at that point I allowed myself the luxury of a little guess that we would do OK.

The first announcement at the prizegiving was the People’s Choice Award. I was absolutely blown away when Penny’s car was announced as the winner. For me that said it all and completely justified the colour choice Penny made right back at the beginning. In face of the considerable pressure from the purists wanting the car to be true to the manufacturer’s plate, she held her resolve and the public agreed. Winning Masterclass as well with a score of 561 out of a possible 590was the icing on the cake. And true to our intentions from the very beginning she was driven home.

When we were asked by the Club to list one special feature of her car, Penny said that unlike most other W113s we know this car is totally rust free.

Many thanks to Donald Webster and “Mercedes” written by Rainer W. Schlegelmilch and published by Konemann – they provided nearly all the information in this article. 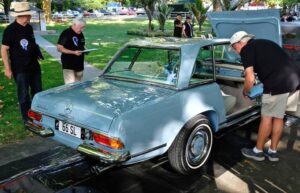 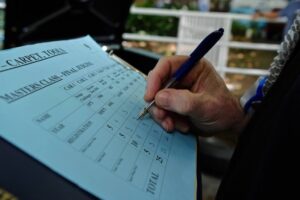 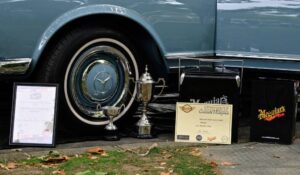