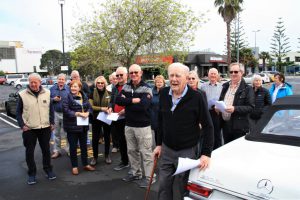 The briefing made it sound simple

There’s life beyond the Bombay Hills – who would have thought?? It was a day out of the most stunning picture book that brought 46 club members together on 06th October. In between two low pressure fronts, that kept the North Island in a wintery grip in the days before and after the run, heavens were kind and allowed us to enjoy an almost perfect day for our run through the wonderful Franklin countryside.

I was biting my nails early Sunday morning. No kidding. I wanted this to be a great day for all those that had decided to get their ‘stars’ out of the garage – a bit of a gamble on an early October day like this. I realised it that morning…  when there were no nails left to bite.Thrilled and motivated by the pre-registrations from members all over Auckland, the Waitakeres, Drury and as far North as Warkworth, the pressure on me rose. I’d never organised an event like this. How would it go, what would go wrong? Would anyone actually show up?

We started early – meeting point was the McDonalds on Great South Road in Manukau. My 4-year-old son Joe was happy. His Sunday couldn’t have started any better way! Mommy. Mommy…  can we go to the playground? Eye-balling the time closely, we marched into the store. Quick, quick I said, have a play before we head back out to meet everybody. While waiting for my son to exhaust himself ready for a BIG sleep in the car, I saw more and more beautiful Mercedes drive past. We’re almost on our way. What an exciting 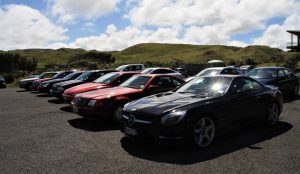 Did our best to fill up the car park at Castaways

Back at the meeting point the group had gathered – a wonderful variety of cars on display. Classic and modern, loved and driven, AMG to SLK. Daryl had done a wonderful job putting together a route for the tour and he was ready to start leading the group on their journey towards South Auckland. The first part of the drive saw us exploring rural country roads in Papakura, Drury, into the Franklin and Pukekohe areas, then aiming for Waiuku as our last passing point before heading straight West to the wonderful Kariotahi Beach and its hidden gem, the Castaways Resort hotel and restaurant, where we had booked in for lunch.

The group was fast ..even faster than the photographer (me) had expected. I was literally the last Merc to drive on the restaurant car park with no photos taken of the group in action… 1.5 hours of driving passed in a matter of seconds. I realised that I had to be a lot more onto it on the second part of the run to seal some 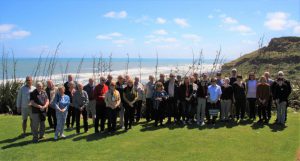 A Mercedes group as wide as the beach itself

great shots to go with this article.

The lunch menu, the service and the location was brilliant. I only heard compliments to the team for the food served that day. After completing a unique group photoshoot on the cliffs above Kariotahi in the sunshine, we set off on the second part of our adventure towards Pokeno.

One thing is certain about Pokeno: The town looks different – every day of the year. Construction is steaming ahead creating building after building, infrastructure, bridges, parks and walkways while the core attractions remain unchanged: The Pokeno Bacon shop still operates the same way it did decades ago and so are the Mighty Ice Cream shops on the main road. Choose from 1-12 scoops on a double cone for those that are brave enough to try and conquer the Mt Everest of ice creams for just $14.

Another hour of driving passed before the group arrived at Zion Motorhomes and McRent, the newest attraction that moved to this location. With European Premium Motorhomes imported directly from Germany, the company prides itself to offer Mercedes-based high quality vehicles to suit almost every budget and customer needs. Jonas, Sid and the team from Zion welcomed the group with coffee and tea, 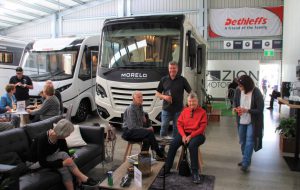 A mobile Mercedes home – best of both worlds!

nibbles, chilled drinks and lots of facts around motorhomes. Many club members spent time enquiring about the rental arm of the business – McRent, owned and operated in New Zealand with strong connections to its German headquarters located in Isny in Southern Germany. Quality is key at Zion and McRent – the customer becomes a friend of the family. This is what happened to the group that afternoon. Arrived as visitors and left as friends.

Armed with full tummies and big smiles, the group dispersed late afternoon … back to known territory: The Northern side of the Bombay Hills. What a wonderful day it’s been!

Thanks to everyone that came with me on this great adventure.