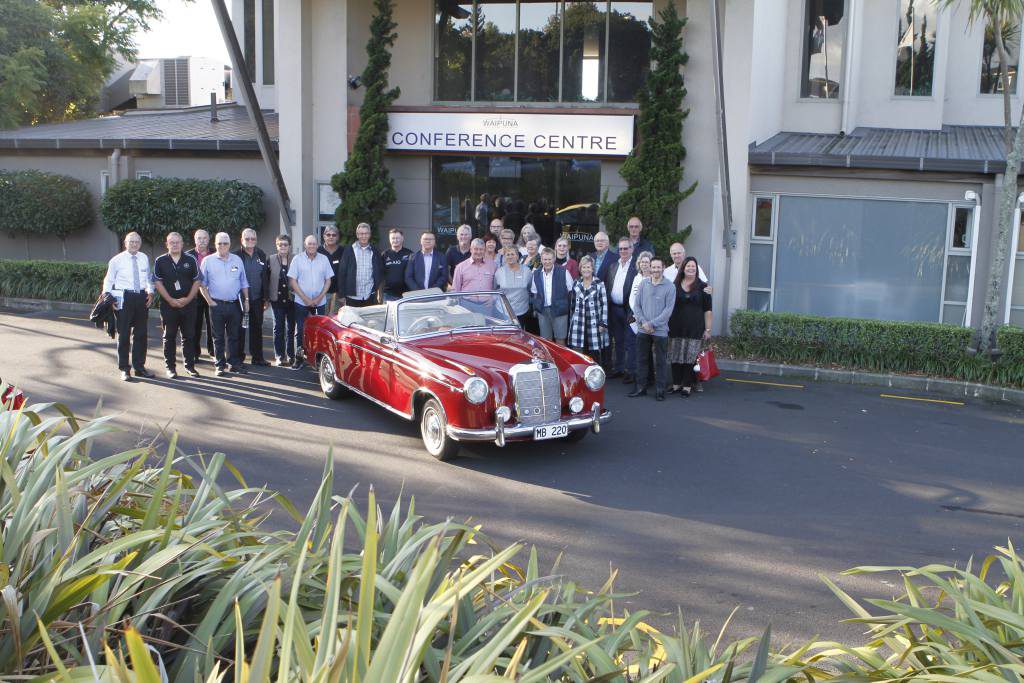 Like Christmas, I’m glad these things only come around once a year.

Twelve months go by so fast. And it is so much longer than that since I was last on the National committee, so it was not hard to forget how much it takes to pull it all together. Daryl, Janine, Harald and Vivian worked on this for quite some time before the day to make sure it all went smoothly. And it certainly did. For myself, I spent weeks and weeks working on the new constitution, with help particularly from Daryl and Graham Cowley. Then preparing all the paperwork for the Executive meetings and the AGM, making sure we had delegates lined up from each club, nominations in for committee positions, etc.

My day started with collecting Frances and Rodney Baxter from the airport. We stopped at home to have a quick cuppa, and then I dropped them off at Waipuna Lodge where they were staying and where the meeting and dinner were to be held. It’s a lovely venue and outlook situated on the side of the Panmure Basin, with a good long walking route around the entire basin.

Next up was the National Executive meeting at Mercedes-Benz Botany, Attendees were Daryl Jeffery (National President), Harald Decker (National Treasurer), Brian Hood (National Secretary) and Vice Presidents; i.e. Presidents of the regional clubs plus an observer from Wellington Club. Topics of general discussion were the Treasurers Report, minutes of the previous meeting, levies for the coming year, current National Club funds, proposed new constitution, international cards, mileage awards, possible future rally, and venue for the next AGM. We will be revisiting these topics during the next twelve months.

Morning tea was courtesy of Janine and Vivian who supplied a cheese board and other goodies, plus other many delectables from Jeremy Spicer of Mercedes-Benz Botany.  A big thank you.

After the meeting some considerable time was spent looking at the various Mercedes-Benz cars on display. I guess some of our bank balances were also considered.

At 3pm we were all ready for the AGM. A good attendance of 31 people. Delegates from clubs had pre-registered. Apologies were noted. Minutes from last year were read and passed. Election of Officers saw the incumbents voted back in unanimously. There was considerable discussion regarding accumulated club funds following the Treasurers Report.  Levies and club funds were discussed, recommendations were made and passed unanimously regarding a reduction in hard copy magazine levies. The committee will also be returning excess from 2018-2019 back to all clubs.  There were two recommendations from the executive and the one remit put to the AGM.  All three passed unanimously. Remit – the new rules were accepted unanimously.

It was noted the National Rally held recently in the Manawatu and enjoyed by all, ran at a small profit. Further information was given as too how we should be working to set up a guideline for distributing money back to regional clubs when we have too large an accumulation of funds.  The Clubs 50th anniversary is just around the corner, so needs ample consideration.

From member feedback it was a good event with no real issues.  Brian is working on the minutes and will have them out soon.  The meeting closed at 3.15pm. A record… I wonder?!

The Dinner was held at the Waipuna Lodge in the same meeting room and a set menu was the order of the day, as we did not get the required number of participants to indulge in the special buffet.

Garry Boyce and Ken Williams gave a detailed talk on preparation of paperwork, logistics and car for their forthcoming experience on the Peking to Paris Rally. You’ll be able to follow their progress from blogs they will be doing which will be posted on the Auckland Club website as they’re received. More detail also in the magazine.

On Sunday morning we set off from Waipuna Lodge for a drive around Auckland City to look at the highlights, such as views from areas of Glen Innes, Bastion Point (a lovely coffee break and views), Kohimarama, up Queen St to the Sky Tower, plus over to Cox’s Bay, before heading out to view Villa Maria Winery at Mangere, close to the airport. Here we had lunch together and a relax at the Post Office Cafe, before some attendees caught their plane home.

The AGM was a success and Daryl would like to thank everyone for their assistance to us, such as Ken and Garry for filling in as speakers, and Jeremy and the receptionist at MB Botany for helping make the executive meeting a success.