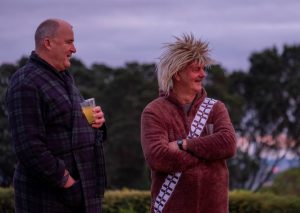 Mike (SL63) asked me to write some words about today for the magazine. So here it is for what it’s worth!

5:45am the alarm goes off. It can’t be Monday already? No, that’s right, it’s the 2022 Dawn Breaker Mercedes Club run. Whose idea was that? Aren’t all the Mercedes Club members retired and enjoying their well-earned daily sleep in.  No matter, Bastion Point is only 15 minutes from home so we are luckier than some. Into the SL500, top already down, cleaned the day before and out of the garage. One member told me later he’s had the wheels off and cleaned the inside of the alloys. Surely that’s taking it a bit far.

On the road it’s dark and cold still which I suppose makes sense given we were going to watch the sunrise but it makes me briefly consider putting the roof up. We catch a C63 on Tamaki Drive, both of us held up by a passenger-less mobile road block doing 30kmh but we get to the Bastion Pt entrance at 6:31 and sweep on up, admiring the black rubber lines on the road, figuring Mike in the SL63 had done those to show the way to the rest of us. The carpark was already full of cars, including a black van whose occupants were somewhat surprised to have their sleep disturbed by a swarm of Mercedes at Dawn. 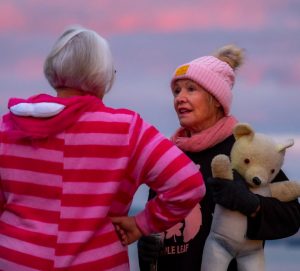 On only our second Mercedes Club event, not knowing how things roll, we were also disturbed to see a cow on two legs, a Wookie, 2 vampires, a under dressed barmaid, Hugh Hefner in his dressing gown (isn’t he dead?) and two real dogs amongst other apparitions. A couple of early morning runners gave them a wide berth, we were about to do the same when I remembered we were supposed to dress in our night attire. How anyone sleeps in a cow onesie that is replete with an udder is beyond me.

We were distracted by the sunrise which turned up beautifully and on cue at 7:05. Janine must have some pull up high as she claimed to have once again organised perfect weather for the run. A group photo or two, probably to be used for blackmail later, and it was into the cars to head north. Mike in the SL63 and Daryl in the SLK55 had a couple of half hearted stabs at traffic light drag races on the way to the Harbour Bridge but aside from an elderly lady in a Honda Jazz RS Sport number plate “SPNSTR” muscling on and out of our convoy of 3, the trip to Gulf Harbour was uneventful. Why only 3? Because most of the rest ignored the instructions and took the logical shortcut through The Strand to get on the motorway so they were already ahead of us.

Once we arrived, most self-respecting members changed out of their sleep wear but a few prize hounds stayed in character. Could that 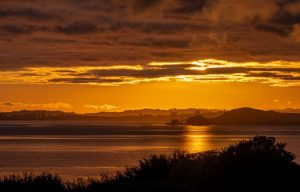 have had something to do with us being thrown out of the cafe at the Gulf Harbour Golf Club Cafe? Something I never expected to happen to The Mercedes Club! The cafe said they couldn’t cope with 25 people but having a cow wander in at 8:30 would have been a shock they couldn’t recover from.

Brett made a quick call and we were off down the road to Ripples Cafe at Gulf Harbour itself. Seeing a grand total of two staff raised doubts about their ability to cope as well but everyone got fed and watered in quick order. Prizes were awarded for best (worst?) dressed, stories were shared of upcoming overseas trips and past (by Ken Williams) about his trips in long continental rallies.

An easy cruise back to Auckland in the sunshine with plenty of time left on Sunday made for a very pleasant morning in great company.