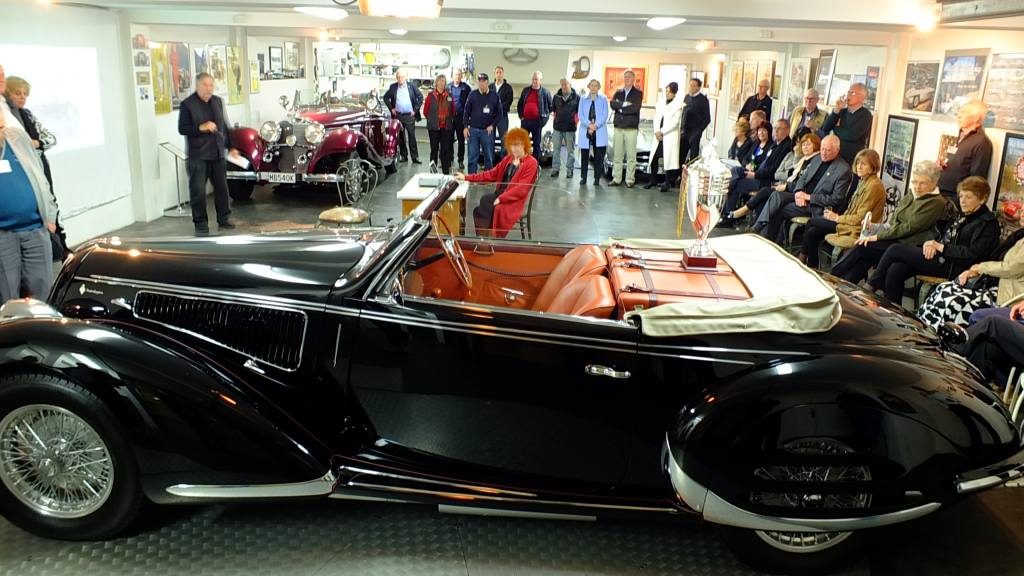 Cars, Art and Music was hosted by Garry and Alison Boyce in their ‘garage’, although given the theme of the event and the beauty of the cars in question ‘gallery’ would seem a much more appropriate term. The statement: “Finer twentieth century automobiles, examples of highly complex and three dimensional craftsmanship, are a higher form of art than mere two dimensional paintings or sculptures” inscribed across the ceiling served to reinforce the feeling that we were gathered in a car gallery rather than a car garage.

So on a cool spring evening in early September, over forty club members were curious to know the answer to the question – “How does an engineer become a designer that becomes an artist?” Showcasing three cars Garry proceeded to answer this question for us. He utilised slideshows and historical articles to lead us through each design process. Then he played a piece of music that he felt represented each car.

After a period of socialising and sampling the fare generously provided by Garry and Alison, Garry called for attention and positioned himself beside the first car, a 1957 Mercedes-Benz 300 SL Roadster. The one thing that stands out on the SL for Garry are the ‘eyebrows’ above the wheel arches. Their function is to smooth the turbulence created by the open wheel arches. Originally on the race cars of the same period, they were transferred to the road going SL to maintain the look and feel of the race cars. So while they are functional from an engineering point of view there is no denying that they are also an art form, adding a sculptural element and motion to the sides of the car. Garry’s choice of music for this car was Johann Pachelbel’s Canon 3 For Trumpets, performed by Wynton Marsalis.

Next Garry took us through the design process of a 1938 Mercedes-Benz 540K, the wooden framework of which is a piece of art in itself. The sculptural element of this car is the one continuous flowing curve from the front mudguards, along the running board, up and over the rear mudguards and around to the tail. The rear bumpers are gorgeous pieces of curvaceous chromed Art Deco that could so easily have been ordinary if not for the designer’s desire to inject an artistic element. Garry described the 540K as a brute of a car, heavy and loud, with a commanding presence. His choice of music, The Ride of the Valkyries by Wagner, was entirely appropriate.

Lastly Garry’s attention turned to the 1938 Alfa Romeo 6C 2300B. More importantly the stunning coachwork by Carrozzeria Touring out of Milan. You cannot help but gaze longingly at the utterly beautiful 6C. The Tenth Commandment was sorely tested many times that night. But where is the art in this car? Well, where isn’t it? The chrome trim on the lower edges of the front and back mudguards accentuates the flow of the body. The cutouts in the rear wheel spats lighten the look of the car’s rear; left solid these spats could so easily have made the car look tail heavy and ponderous. The pinstripe of burgundy leather that begins at the base of the grille and flows over the front mudguards and runs the length of the running board before finishing at the rear mudguard. The unusual combination of tangerine and burgundy leather upholstery, with matching luggage, is art in itself. These are the official colours of Rome and A.S.Roma, the Italian football club that plays out of Rome. A.S.Roma fans sing the anthem “Roma is not to be questioned, it is to be loved.” This anthem could so easily be sung about the Alfa Romeo as well – “The Alfa 6C is not to be questioned, it is to be loved.” These are all examples of the design, colour and passion coming out of Milan in that period. Garry chose the haunting and emotional aria Ebben! NeAndro Lontana from the opera “La Wally”, so exquisitely performed by Maria Callas, as his accompanying piece to the Carrozzeria Touring bodied Alfa Romeo 6C. What a grand finale it was!

As the evening ended I’m sure many of those present reflected that the art of the engineers who designed these cars, became apparent to us through the insight and passion of Garry Boyce.  Thank you Garry and Alison for hosting another enlightening and engaging evening.

Click here to view the photos on our Gallery page.