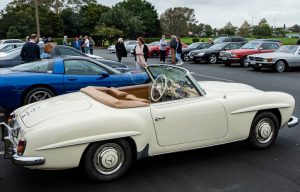 After months of sunny days in Auckland, the weather people forecast showers for the day of our Top Down Tour. The morning was overcast with a bit of wind but it didn’t deter a good turn out – 25 Mercedes and one imposter. There were reports of weather related roof adjustments being made en route to the rendezvous point at Parrs Park in Oratia. Most tops were down as we set out, after we visited the playground to count the bugs.

Ken and I were near the back of the convoy. When we got to the first roundabout there seemed to be some confusion with a steady stream of Mercedes coming in unexpectedly from our right. We were then stopped by roadworks which provided plenty of time for a robust discussion on whether we were on the right road. When the lights changed we found we were in company and the route seemed clearer!

If you want to go from Oratia to Whangaparoa I am not sure I would ask Barb and Greg for directions! But they showed us many scenic parts of the west and north Auckland region. We took a convoluted route through the lower part of the Waitakeres to loop back to Westgate, where some managed to find a park to count the motorway and bike lanes. Others made an educated guess! Heading over the motorway we toured through Hobsonville, Whenuapai and Herald Island to find Santa’s beach. Reportedly, some did their bit for the planet by skipping the tour of Herald Island.

We then visited Clarks Lane footbridge. The residents were very helpful, offering off street parking as their short narrow lane filled with Mercedes. We inspected the Clay Carpet sculpture by Matt and Kate McLean that decorates the bridge and its approaches, though it took some time to find the artists’ signature.

We then headed up the Upper Harbour Motorway to take a detour through Greenthithe to count the leaves on the walkway entrance panels, another lovely piece of street art. It was a test of attention to detail as the leaves were in bunches – more than 100.

Passing through Albany we headed over to Coatesville via the Coatesville estate, better known as the Chrisco estate or Dotcom mansion, before circling back around the heights of Albany (where Chorus doesn’t care) and dropping down under the motorway onto East Coast Road. Turning left over the motorway we headed to North Shore airport, avoiding the hidden dip but not the rain showers, before crossing the motorway again onto the Hibiscus Coast Highway and Whangaparaoa Road to a well-earned lunch at the Pararoa Brewing Company. 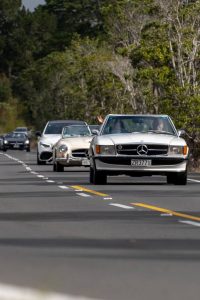 Despite assistance from GPS maps, Google and the usual “team work” there seemed to be a number of deviations from the route as set out by Barb and Greg. Next time maybe we should compare kilometres travelled?

Thank you to Barb and Greg for organising a great day out. Congratulations to Angelique and Chris for top marks on the questions. Second equal went to Mike and Daryl, Sue and Trevor, and Noel Williams. Third equal were Lindsay and Karran, Debbie and Chris, Brian and Lyn, and Janine and Deepa (after discussions with the judges).