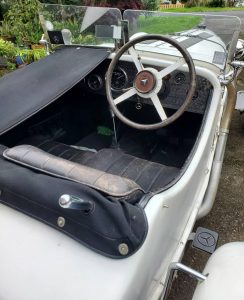 Ferdinand Porsche arrived at Daimler in 1923 after many years at Austro-Daimler and was immediately involved in developing a new straight-six engine.  Described in 1924 as a money-no-object engineering exercise this 6.0 litre monster featured a magnesium block, single overhead cam, wet liners and only 5:1 compression because it was also supercharged. The supercharger was essentially passive, only operating at full throttle and then pushing output to 140bhp for a few minutes at a time.

For 1928 the engine went up again to over seven litres in the SS, giving 200bhp at a mere 3200rpm. Caracciola won the German GP again in an SS. 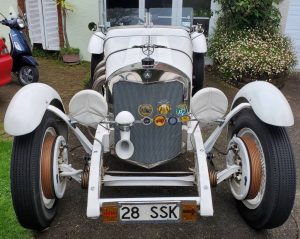 The SSK, of which only 31 examples were built, used a shorter chassis for increased agility (the ‘K’ stands for kurz, or short, and not kompressor as on the current SLK). There was also increased supercharger boost to bring power up to a maximum 225hp. Rudi C. wasted no time in breaking lap and hill climb records in this big white SSK, winning the European hill climb championship and winning all but two Grand Prix in 1929. After another almost all-conquering year in 1930, a lightened version of the car, the SSKL (‘L’ for leicht, or light) arrived in 1931. It featured a drilled chassis and 300bhp and with Caracciola at the wheel walked off with the Mille Miglia, the Eifelrennen, the German GP at the Nürburgring and the Avusrennen, amongst other races. Caracciola not only won seven hill climbs but broke course records at all of them too. Despite the cars’ successes, Mercedes-Benz decided it couldn’t afford a works team for 1932, though privateers continued winning in them right up to WWII.

Some of the world’s finest cars were built in such small numbers that ownership is for squillionaires only.

Of course, you can always make your own – a replica – but you need dedication to create a car completely true to the original.

Ian Banks certainly had dedication and the 1928 SSK Mercedes replica he built is just such a car. When asked how long the project took, the answer was, “About 50 years”. But the reality is that it was 35 years in the planning and over four years in construction. Not far short of his sixth decade, Ian found himself with time on his hands and the full-size plans and drawings all completed. On December 17th, 1989, he swept the garage floor and started.

The chassis was made in a day with a plasma cutter and the mig welding help of Robert Posa Engineering, but after that it was a steady work program. The making of a wood-framed body like the SSK’s is a fairly straightforward business: you either have the skills or you haven’t. The replica uses marine ply rather than the original ash.

Three years after completion Penn McKay took Ian’s car for a spin and wrote about it for Classic Car magazine. 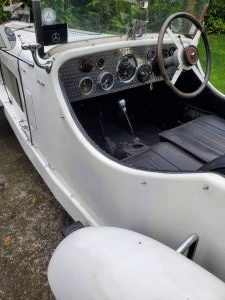 The mechanic’s seat is offset to the rear of the driver’s, to ensure that the driver’s shoulders are able to move freely. The seats are actually modified Escort items!

The giant half-elliptic springs front and rear and the rigid beam axles are complemented by a huge steering wheel. In a style not uncommon in those days, the accelerator is between the footbrake on the right and the clutch on the left. I really enjoyed driving a car that was faithful to its inspiration, but that mid-mounted accelerator made me nervous in Saturday afternoon city traffic. I knew that under stress I could forget about it and stab for the footbrake just where the accelerator was!

Not so Ian of course: he confidently booted the loud pedal and changed gears whilst swinging on the wheel, shoving us into a traffic stream which magically parted to let this “blast from the past” in amongst the technicoloured mice.

It looks and is the part, particularly when you sight along the profusely vented bonnet, the two big headlights, the triple-pointed star and the cycle guards.

As we gathered speed, everything moved in accordance with the characteristics of leaf springs, a rigid full-length chassis and the scuttle shake so essential in this sort of car. The modern dohc Merc roared cammily, providing the last segment of the illusion. Even though it was a cold winter afternoon and I was exposed to the elements, I still found myself loving a recreation of an experience that very few humans are able to enjoy these days.

When my turn came to drive, I found myself laughing – perhaps due to nervousness over that accelerator and the fact that I was the centre of attention in the surrounding traffic. 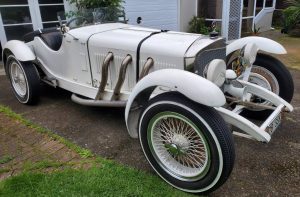 This is not a car for shrinking violets. There’s nothing smooth or bland about it, you feel the leaf springs front and rear and every reaction of the steering and road wheels. I don’t know the turning circle but you’d need an airstrip to turn in one bite. I wasn’t game to take it down the drive when we returned to the garage – I’d need a couple more hours to get the confidence to handle this kind of car in a tight situation – but it cruises at traffic speed in all conditions.

“With mechanical brakes and an ex-factory speed of 140+mph, they must have had big balls to drive the way they did in races”, commented Ian. Too true mate!

Ian created a book that is a full record of the build. This was published in serial form in BeNZscene in 1996. We plan to republish the serialised log as space becomes available.