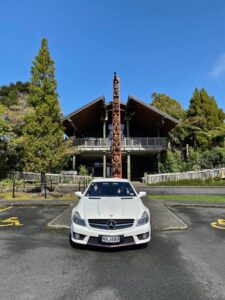 the West of Auckland seemed like a perfect idea.

The weather had other ideas…

Six hardy (and maybe somewhat optimistic) teams gathered at the Olive Tree for a 10am start in what can only be described as stormy conditions.

The rain was torrential and also horizontal at the same time, and many of us got soaked just going from the car park to the Café!

There was talk amongst us about maybe simply just heading into nearby Titirangi Village and waiting out the rain in a café, rather than brave the filthy weather outside.

Common sense didn’t prevail in this case and the instruction sheets, along with a large plastic bag to put our scavenged bits and pieces into, were handed out to all teams. We did note the instructions were handed exclusively to every female in the team. Was this on the assumption they would be navigators and not drivers?

The instructions seemed quite simple – All we had to do was scavenge items that spelled SCENIC DRIVE and take photos of four rather scenic points in and around the Waitakeres. Extra points would also be awarded for items scavenged that told a story and a team name that was creative.

And we had two hours to do it.

We decided to strategise when we made it back to the car (soaking wet once more) by scavenging  what we could in and around the car that would get us started on our quest to find items that spelled Scenic Drive. And we were quite successful in finding a cap (C), and a few other things.

It turned out our team was the only one who chose to hand the driving duties to the female member. We 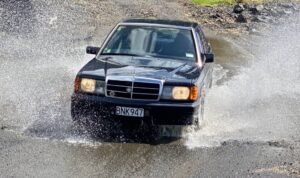 didn’t get extra points for this although we thought we should have.

We decided to go to the checkpoint furthest away and work our way back from there (Google Maps to the rescue), all the time keeping a look out for things to scavenge along the way.

The first three checkpoints were ticked off in the squally conditions before the weather began to fine up and we also managed to pick up some items along enroute (“Stop the car! I’ve seen an Empty coffee cup and a Stone!”).

And we were kept entertained by seeing the other teams in their Mercedes crossing and re-crossing our path. The best scene was seeing four of the six cars all arrive at the Arataki Visitor Centre at the same time.

Who knew my “I’m not competitive” wife would transform into a demon-driving, demanding diva? So much for “taking it easy” and “it’s not a race”. That went straight out the window once she got behind the wheel….

Although she did resist the temptation to drive full noise through the ford at Little Huia (unlike some others).

Our best effort was stopping at a local dairy to buy an ice cream (Ice cream wrapper, Ice cream stick and a 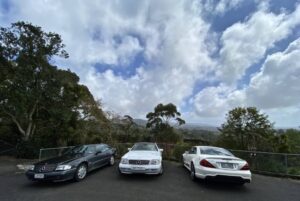 By now the rain had stopped, the sun was out and wind had eased back to only gale force.

Our most creative scavenged thing was some Vegetation (although some may argue there was so much around it wasn’t all that…).

Once all the checkpoints were ticked off and photographed we still had two letters to get and we headed into Titirangi Village to find them. We scavenged an Empty cardboard box and a shop Docket to complete our spelling of SCENIC DRIVE and headed back to the Olive Grove where the other teams were gathering. And it only took us 90 minutes – well inside the target time.

There were some interesting items scavenged and the best story of the day was Arthur and Sue Iles who had time to do a spot of fishing and landed some fresh already-filleted snapper (at least that’s what they thought it looked like). They were worthy winners of the Scavenger Hunt.

Prizes were awarded to all participants and lunch at the Olive Tree was delicious.

A big thank you goes out to Chris for organising a well-run and very entertaining Scavenger Hunt. Hopefully we will see more teams at the next one – weather permitting!