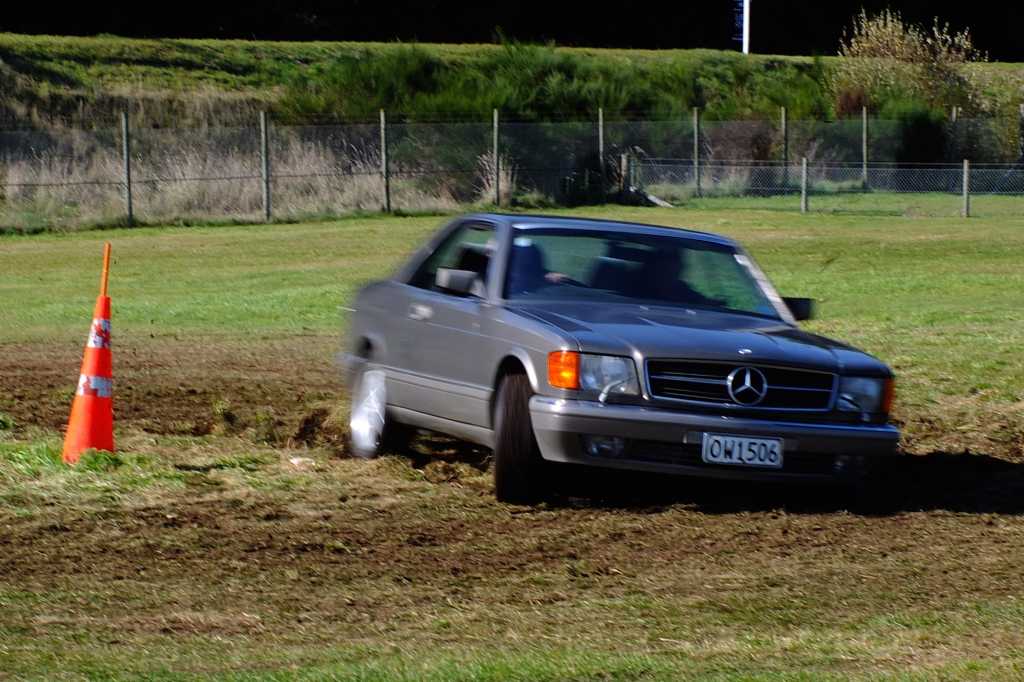 What a beautiful morning to wake up to! Sunny and warm until we got to Taupo Motorsport Park’s grass paddock to discover a seriously chilly breeze coming in from the mountains. We set up Test 1. A fast blat up to a cone then a simple slalom back to the finish. Then we set up Test 2. A cloverleaf where you almost got dizzy going in ever increasing circles with lots of sideways sliding and testing your car control. By 11am we had 14 entries all keen to go. Bill and Tina Bray kindly brought their caravan to set up a windbreak shelter for driver’s briefing and spectators. After signing the indemnity form and being told the rules of the two timed runs at each test – starting, stopping, and penalties for knocking over a peg or sliding past the finish line – then the fun started. The damp grass gave lots of wheel spin to test our ESP, then tried out our ABS as we slid to a halt to finish astride the finish line. Test 1: Was won by Bill Bray in his ML 320 CDI 4×4 with a time of 21.75 with no wheel spin whatsoever! Second was Greg Lokes in the 350SL with a time of 22.16 and third was Ken Williams in the 420SEC at 22.57. Next was Kath Winn in the 420SEC at 23.53, then Bruce Wallis in the CLS500 at 23.91, closely followed by Rod Baxter in the A140 at 24.28 and Barbara Lokes in the 350SL at 24.29. We moved on to Test 2 the Cloverleaf: It was very slippery around the centre cone resulting in a few spinouts and lots of laughs. Bill Bray in the ML 4×4 only had one try at this to set a good time of 56.59 then went over to the caravan to produce a BBQ and start cooking sausages for us all!  Ken Williams in the SEC managed a time of 54.62 to win this test, followed by Bill in the ML then Rod Baxter in the A140 at 58.9, then Greg Lokes in the 350SL at 59.41. Next was David Winn in the 420SEC at 60.16, Kath Winn also in the SEC at 60.65, Warren Anderson in David Firkin’s E320 at 60.72 and Tom O’hagan in the SL600 at 61.00. Then Kevin Burt arrived after his river trip. He was persuaded to have a go in his C43 AMG on the cloverleaf. He would have won the ‘Show Pony Award’ for his spirited sideways style, getting a time of only 72.56 but having enormous fun!!! (It sounded fabulous). Unfortunately he had to go before he had a run on the slalom which we had left set up for any late arrivals. We then enjoyed the hot sausages in bread with a hot drink kindly supplied by Bill and Tina Bray. We were going to set up another test but several people had to leave so we added up the scores and had a Prizegiving. First was Ken Williams with 77.19 seconds, who won a model 300S cabriolet. Second was Bill Bray with 78.34 but was given a model of a BMW because his 4 wheel drive was in a different class! Third was Greg Lokes with 81.57 and was given a model of an SL. Thank you Peter Shelton for the prizes. Thank you Mr Woods for doing the timekeeping.  Lorraine certainly enjoyed the driving!!  And thanks to all the other volunteers who helped, especially Bill and Tina Bray. A good time was had by all! Ken Williams [huge_it_gallery id=”21″]