A total of 45 cars took part this year. We were car 14 and Tom O’Hagan and his navigator Kevin Plunkett were number 12. Among 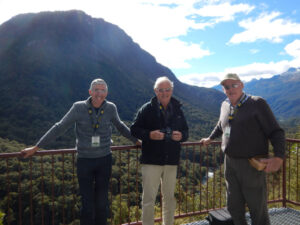 the cars were 7 Mercedes Benz, 4 BMW, 9 Porsche, and various other marques including a Reliant Scimitar and a 1928 Rolls Royce. Entrants came from as far away as Hamilton but the majority were from the South Island. On Sunday 11th April we met up with those entrants who had not been on the Autumn Colours event and all had a very enjoyable dinner together.

We set off early from the Oakridge Hotel. This was to be the longest driving day we had. The route took us from Wanaka to Haast with a checkpoint stop on the way to answer some questions. As we got further to the West Coast the weather unfortunately did not behave nicely. It absolutely poured down which was a shame as some of the planned activities could not go ahead. The local school at Haast put on lunch for us which was fantastic. The children performed a song and haka and the tables were groaning with food prepared by the local families. Some of us drove to Jacksons Bay for a look which unfortunately became a drive in and out as the weather did not let up and the rain was horizontal. A few hardy ones opted for the Jet Boat ride. We then headed back as our night stop was Queenstown. The rain got heavier and we were treated to some spectacular roadside waterfalls. As Kevin and I were driving out of Haast we came across a bus that had somehow beached itself across the road (a bit like the ship in the Suez canal)! We managed to be guided around the front (just enough road left) but I would say it would have been sometime before they could get the bus free. We had a lot of questions on our question sheet that day to answer but got through them. After handing them in at the finish in Frankton we headed into Queenstown for our accommodation. A lot of us opted to stay put for the night and eat at the hotel as the rain had also started in Queenstown. Others braved the town that night.

A look around Queenstown in the morning before a more leisurely drive to Te Anau was the order of the day.  Once again though 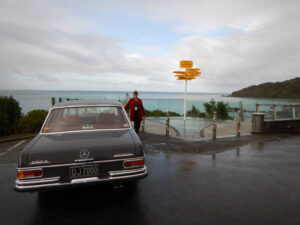 we had the question sheet (shorter this time) and route instructions. Again, a checkpoint at Mossburn where we were separated – the driver to answer questions and the navigator to carry out a small challenge of throwing plastic balls into a stack of tyres – harder than you think! But it was all in good fun. We arrived in Te Anau and met up at the local tavern for our first dress up night – The Wild West. Lots of laughs and good fun.

This day was a drive up the Spectacular road to Milford Sound. Again, question sheet to answer and hand in at the end of the day. We had never been on this road before so it was amazing to drive. The weather cleared to a sunny day. The Homer Tunnel in and out of Milford is just incredible. You approach this wall of towering rock with no other way through than the tunnel. Then the view the other side was out of this world. No wonder Milford is known as the eighth wonder of the world. Those of us who wanted to went on a Cruise with Milford Cruises. This proved to be a highlight. We had been given a packed lunch so we either ate on board or waited to picnic at various stopping sights on the way back in the afternoon. A spectacular view of the Hollyford from Pops Lookout was one the highlights. The Mirror Lakes were beautiful. Again, we had questions to answer and hand in at the end of the day. That night we met up in a different local tavern. Some stayed on for dinner there and others went to the local restaurants that were open. All in all, a wonderful day of new experiences.

We left Te Anau in light drizzle flagged off by people who had been associated with the rally over the years. Our route instructions took us down to Tuatapere which was to be our lunch stop. The Lions club hosted us at the local rugby club rooms so we had another chance to see all cars lined up together. Another surprise checkpoint to answer some questions and the usual question sheets to fill out and hand in at the end of day. Tuatapere is the sausage capital of New Zealand and there were some for lunch which were pretty good. Great roads to drive and very interesting places. We stopped at Riverton and visited their museum which 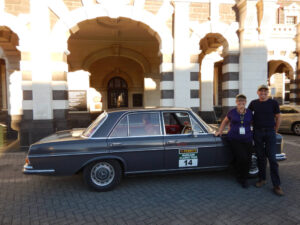 was absolutely wonderful. What a treat to find it. Our route then took us into Invercargill and our accommodation. We met for dinner at the hotel/motel complex with many enjoying the oysters that were on the menu!

Free morning in Invercargill. Although the temperature was 4 degrees and the wind icy this didn’t damper our enthusiasm. The majority of us took advantage of the chance to visit the Bill Richardson Transport Museum. What a place. This is a must if you ever travel to Invercargill. Kevin and I also took in the Classic Motorbike museum as you could buy a ticket for both in a combo deal. The photos speak for themselves but both are well worth a visit.

That evening was the prize giving dinner held at the conference rooms in the Bill Richardson Transport Museum building. The theme was James Bond so we all dressed for the occasion.

Kevin and I were lucky to win a prize for the checkpoint and team events. We also came 3rd in the sheet questions. We won a 6-month subscription for Classic Car Magazine and some car wash. Then various owners were presented with plaques for best car in their decade.

Following our route instructions, we drove from Invercargill to Bluff first then back over some lovely coast roads through the Catlin’s to our lunch stop at the Whistling Frog Cafe which seemed to be in the middle of nowhere. However, this is a camping ground as well as a café and accommodates the many camper van travellers that will hopefully be there again. There are also a few cabins. Another spectacular part of the country worth a visit. Kevin and I faithfully stuck to the route instructions after lunch which took us onto SH1 for a while and then off and up the coast road into Dunedin. The views and motoring roads were fantastic and the lovely weather complimented the scenery. Our finish stop for the day was at the Historic Dunedin Railway Station. We took advantage of the photo opportunities here as normally you could not park directly outside. We got together for our last dinner that night which was a very relaxed and fabulous Italian meal in a very busy restaurant in the old Savoy building in the 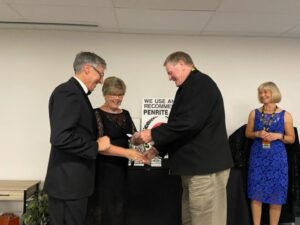 We said our goodbyes after breakfast in the hotel and promised to keep in touch. It was a wonderful week and we made some lovely friends. Our one regret is that we had not done more of David and Christine’s rallies in the past but we were very happy to be part of the last two. Well done to the Merthens. We thank you.

From home and back we travelled a total of roughly 3000 km for both the Autumn Colours and the Mainland Classic. The 280S performed faultlessly and was a very comfortable and cosy ride. The car averaged around 10 litres per 100 km which was impressive for a 50 year old vehicle.  Kevin was very pleased with the performance of the car as he had spent time carefully preparing it to ensure that we enjoyed trouble free motoring which was certainly the case.