Ham for a Hamburger

Ham for a Hamburger 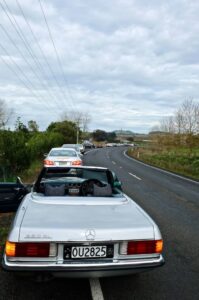 hard top. Going to be a wind in the hair day!

First challenge was actually getting to the starting venue. We’re cruising down SH20 when Greg spots an old Merc up ahead so it’s foot down and we catch up, pulling into the outside lane to overtake, admiring and waving. Lol, Greg was so distracted that instead of taking the left fork, Southbound, we take the right fork to the Airport! We eventually get back on track and have a laugh with Brian, driver of the old Merc, when we meet up again at BP Papakura.

There are 18 cars lined up readying for the day. Great turn out. Daryl gets us all off in convoy, with us being tail end Charlie. We head south down the western side of the mightly Waikato River. Cruising winding country roads with lovely green New Zealand countryside around us. Greg loves to drop down to 3rd gear to hear the V8 rev and power around those bends. I regularly remind him to go back into 4th, 3rd might sound good but 4th is much better fuel economy.

We arrive down at the Hamilton Classics Museum and meet up with Lloyd & Trish in their lovely Pagoda. Lunch first in the Jukebox Diner then courtesy of Garry Boyce and Tom Andrews, the Museum owner; we get free entry into the Museum. It’s a great collection of cars and car related memorabilia. The beautiful red 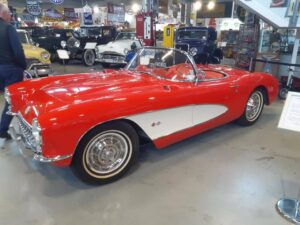 1957 Chevrolet Corvette I admired last time we were here is still looking gorgeous and I drawled over the stunning red Cord too. I wandered around with Percy & Sue, peering at various engines and asking Percy lots of, probably dumb, questions. I’m trying to educate myself on how engines work. I figure it’s easier to see the basics on the older, simpler machines.

Then we got to see something really really special. Danny, a worker there, opened up the workshop so we could view the 1937 Bugatti Atlantic being built there.

The back story to this car is amazing;

Roger Baillon was a French shipping magnate who starting collecting pre war cars in the 1950’s intending to start a museum. His business faltered in the 1970’s and he had to sell off half his collection. The rest he stored around his property. When he died his son inherited them but he didn’t care much about cars so they just sat there rusting away until he died and his 2 sons then inherited them. They visited the property and discovered the mother of all barn finds! They had no idea the cars existed. The collection went to auction in 2014 and all cars sold under the hammer netting over 28 million euro. It set several new records of car prices. 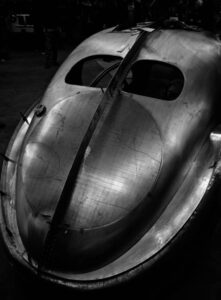 Chassis (number 57579) but the car had been originally sold with a Gangloff body. The running gear is all number matched to original so the chassis had never been pulled apart. Apparently it was quite common to have different bodies. Some people had summer and winter bodies to suit the weather.

When Bugatti first sold these cars (only 719 ever built) the purchaser had a choice of 3 different bodies, the Ventoux for 70 thousand French Francs, the Gangloff for 80 thousand or the Atlantic for 150 thousand. At the time the average car cost 5 thousand! Only 4 Atlantic bodies were ever made and only 3 remain, one in the Ralph Lauren Collection.

In preparation for doing the restoration Tom had amassed a whole lot of parts but when he got the car, he realised he didn’t need them. He thought “oh well, I’ll build 2”. All he was missing was a second frame and body.

His dream is to restore the Ventoux body, but not back on the current chassis. Instead it will be restored

on a new chassis built from the parts. That will be part two of the project.

For the complete chassis his ambition was to build an Atlantic body. He got a wooden frame manufactured in Germany and a Pukekohe company has crafted the aluminium body from scratch using photos and original drawings of the Atlantic body. So this is a mixture of restoration i.e the chassis, and re-creation i.e the body. It will be spectacular when finished. For me it’s a privilege to see it like this; half done. You can see the dents where the rubber mallet is used to shape the metal frame around the wooden templates – it’s a painstaking, intense, manual process. A true labour of love.

That is what interests me more than the value of the car, it’s the passion of those involved.

All in all it was a great day out. Something for everyone and as we blasted home up the motorway I reflected how lucky we are.

Thanks Daryl for organising the run, Thanks to Garry & Tom for letting us behind the scenes and thanks to everyone who came along and added fun to the day. Love being in a convoy! Following the 3 pointed star to exciting new adventures.