The National Lockdown of the country in 2020 meant that the Final Autumn Colours Trip was postponed to this year. David and 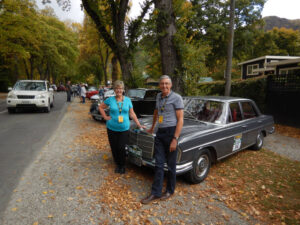 Christine Merthens have been doing these events for the past 30 odd years so they run like a slick machine. We had initially met David and Christine through the Mercedes-Benz Club when they had been members of the now defunct Otago/Southland Mercedes-Benz Club. From that we had participated in a previous Autumn Colours event and enjoyed the experience.

Kevin and I left our home in North Canterbury on Friday 9th April in our 1971 280S and drove to Dunedin.  A leisurely drive to Timaru to catch up with friends and then on to Oamaru for lunch at the lovely Criterion Hotel in the Victorian part of town, set the scene for the weekend.

We arrived in Dunedin and went off to our first evening get together. It was wonderful to catch up with Tom O’Hagan from the Manawatu Club who had also been on the Autumn Colours previously. To our delight we found out he and his navigator were also going on the Mainland Classic the following week.

The next morning all 47 vehicles of all marques and ages, their drivers and navigators assembled at Olveston Historic Home for the briefing and each car was then flagged off at the start line.

Our route instructions were easy to follow and we soon all got to our morning tea stop at the Dunback Bowling club. The lineup of cars was spectacular here. There was great interest in a replica GT40 which did not have a lot of room for more than just the driver and passenger.

Lunch was at the Orchard Garden Café just out of Arrowtown after an absolutely spectacular drive that had taken us via Wedderburn, Macrae’s Flat and down roads we had never been before. The Macrae’s-Hyde highway was the most amazing for 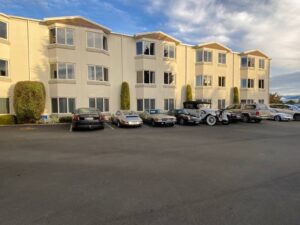 scenery and roads for driving.

We arrived in Arrowtown for the night and all met at the New Orleans Hotel for drinks and dinner. The next morning the cars assembled under the beautiful tree lined and famous main street in Arrowtown among the Autumn leaves. We all attracted a lot of interest. At the same time a cycle race was starting. Unfortunately, they were going our way which meant a lot of patience by the cars as we travelled. Our route took us to Cadronna and our last get together of lunch at the historic hotel.

After we said our goodbyes those of us who were continuing on with the Mainland Classic drove straight to Wanaka and our accommodation keen to begin our week-long tour.