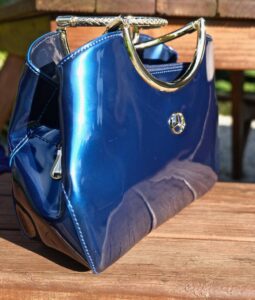 With a bit of an online shopping habit, she discovered a blingy handbag complete with Mercedes logo and accessories, in a range of glorious metallic colours.  She arrived at the Auckland AGM with her newly arrived purchase in a dazzling metallic blue.  Pity it didn’t match Arthur’s more sensible white R129.

But she quickly gained the attention of other club members, who may have been predominantly female.  During the AGM lunch at least three orders were made online – okay, a bit more attention to the matters arising might have been appropriate.

The bit that Sue failed to mention was that because the supplier is based in China there are considerable delays in shipping at present.  There were a few concerned purchasers who wondered if their money had been misappropriated.  Mercedes Benz Club Auckland Committee meetings were forced to include an agenda item to update on parcel tracking and other spurious comments on the merits on online shopping and the quality of non-Mercedes Benz suppliers.

After some weeks the bags landed only for some deliveries to be delayed further in Auckland. 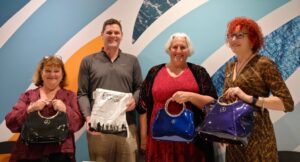 No, not by lockdown, but because the couriers (or husbands) did not attend meetings to transfer the goods.

But there were a number of well-accessorised members attending the prize giving event at Akarana Yacht Club, although one member was unwilling to unwrap the goods on his other half’s behalf.

To recognise her contribution to international trade and raising the sartorial standards of the club Sue was awarded the wooden spoon for stirring award this year and we look forward to her purchasing recommendations for 2022. 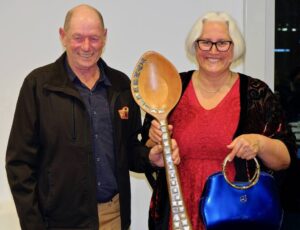 If you would like to order your own blingy handbag go to https://evapurses.com/product/mcd-luxury-handbag-with-matching-wallet/