I have now owned this beautiful car for 15 months and driving her is an absolute pleasure.When I took possession of her she was in need of a serious clean which I have worked hard on and continue to do so. I washed and polished her over the first six months using Meguiars Wash & Wax and then Meguiars quality polish. As she still seemed to be lacking a real deep shine I decided to use Meguiars Quik Clay on her. This is like a putty and used with a spray lubricant which, when rubbed over the paint work, takes off contaminates that are impossible to remove with cutting and polishing. Have a look at this on YouTube. After this I again polished her and she now looks great. 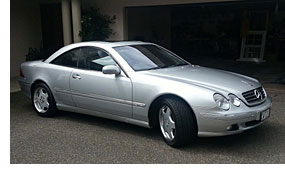 Long term the plan is to repaint her to eliminate the stone chips etc that have appeared with age. Her wheels had been curbed so I had these tidied up at Arrow Wheels in Kelston after I managed to get a half price coupon on Grab One.

Her windows were suffering from water spots, which I am told is quite common on some Mercedes as the high quality glass they use is softer than normal. I bought a product called C-Thru Water Spot Remover. It is a paste and supplied with a pad, which you impregnate with the paste and then painstakingly work on 10cm square panels on the window. Ideally, test it on a small patch first so that you get an idea of the pressure required as too much and you will scour the glass. Her windows are now looking much better and when using the wipers the screen is clear and clean.

Mechanically she was in need of some work. I took her to Peter Gawn at MotorService in Panmure and found him to be very professional and helpful. He did my servicing – oils, filters, transmission oil, etc – as well as some troubleshooting.

Next up, she was running a bit hot, so I bought a new fan from the US and fitted this. Then there was her slight miss, which annoyed me. I bought 24 new NGK Laser Iridium spark plugs, 12 cylinders-2 per cylinder, from the US ($14 NZ landed but $40 if bought here) and fitted these along with two new coil packs, bought from RockAuto in the US. I used YouTube to find out the best way to fit these. I have found a number of tutorials online that helped a great deal in learning the best ways to do these jobs. It is a great help to have someone show you how it is done.

RockAuto are a web based company www.rockauto.com and have been great. Delivery is usually six days from time of ordering. They not only have mechanical parts but also items such as tail light assemblies, which for an OEM part for the CL600 is about US$70 + freight. Their freight costs can be quite expensive so you can use the option of YouShop, which is run by NZ Post. They have a depot in Portland, Oregon, where your parcel is sent, and then YouShop consolidate all parcels and ship to NZ. Usually the freight within the USA is free so the overall cost of freight works out to about half the cost. It takes about eight days from order to delivery to you. This service is now also available from the UK.

After fitting the plugs and coil packs her engine was then as smooth as silk. However, not content with this, as I felt she was not responsive enough on the fly-by-wire throttle, I decided to purchase a Pedal Box from ECUCHIPS www.ecuchips.co.nz in Whenuapai and fit it to her throttle. This makes the throttle more responsive, in variable stages, so I was able to select the setting that best suited my driving and only took 10 minutes to fit.

Again, I decided I wanted one more upgrade, so I had her ECU chip remapped which gave her another 30kws and 50Nms of torque. This work was carried out by Basil at Autopassion www.autopassion.co.nz. Although based in Christchurch, he regularly visits Auckland to re-map ECU’s. I took out her ECU and dropped it off to Basil’s Auckland workshop in Ellerslie. He took it back to Christchurch, did the remapping and couriered it back to me, two days in total. This is not an additional chip but a re-map of the existing ECU, which is much better.

She is now an absolute dream to drive, quick, responsive and beautiful.